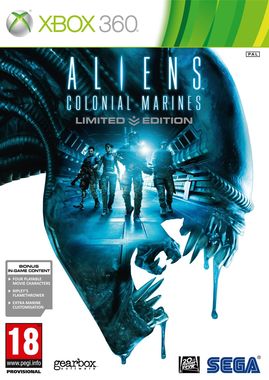 In Aliens: Colonial Marines, players are part of a United States Colonial Marine squad and must prepare to face an alien assault more intense and horrific than ever before. Driven by a compelling and original story penned by renowned writers Bradley Thompson and David Weddle, Aliens: Colonial Marines will retain the atmospheric look and feel of the original films while leveraging next-generation technology to create an entirely new interactive Aliens experience.

Packing classic Aliens weaponry ranging from pulse rifles to flamethrowers as well as brand-new equipment and skills all within a squad-based combat system, players will become an elite United States Colonial Marine. Featuring claustrophobic environments, a brooding soundtrack, and a multitude of surprises and shocks, players will battle against menacing alien hordes in strikingly detailed levels that include the stark interiors of the abandoned Sulaco and unique environments created specifically for the game.

Aliens: Colonial Marines will feature a story driven single-player mode and an all-new four player co-op mode allowing players to share the chilling experience with three friends. In co-op mode, each player will assume the persona of a Colonial Marine and have a distinct role to play in the completion of every mission. Additionally, more multiplayer modes will be revealed later in the year that will complete the Aliens video game experience.

Storyline:
Aliens: Colonial Marines begins with an ostensibly abandoned ship, the U.S.S. Sulaco, recovered in orbit around LV-426. Players lead a group of highly trained United States Colonial Marines as they board the deserted craft to uncover the fate of the crew. They will have to fight to survive unspeakable horrors and their own anxieties as they chase down the truth behind a galaxy-spanning deception that places humanity at the mercy of the most murderous and deadly species in the universe. Aliens: Colonial Marines features authentic environments, such as the surface of LV-426 and Hadley's Hope, weapons inspired by the film series and is designed to provide an exhilarating and engaging new chapter in the Aliens universe.