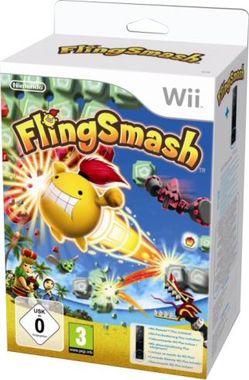 Get ready for the launch of a smashing new game from Nintendo - FlingSmash, a unique game from Artoon that combines the hands-on fun of tennis with the non-stop action of pinball. The software also comes bundled with the new Wii Remote Plus controller.

When the tropical Suthon Island is invaded by the evil Omminus, our ball-shaped hero, Zip, is summoned to save the day. Adding to all the excitement, FlingSmash will come bundled with the new Wii Remote Plus, a Wii Remote with built-in Wii MotionPlus functionality. This addition mirrors your exact movements while you play, allowing greater accuracy as you fling Zip at targets to smash your way across eight colourful worlds. From sandy beaches to lush tropical treetops and even underwater grottos, there is so much for you and Zip to explore.

The game is a classic action sidescroller in which you fling Zip at particular angles to smash objects, such as enemies or bricks, or travel down corridors. Left handed players can flip the game and position Zip on the left side of the screen - scrolling left to right.

As you progress through the levels, Zip transforms into different ball types, each offering a unique challenge. Zip might be shrunk down, fattened up or turned into a heavy steel ball which requires a huge fling to get him moving through the levels. In other levels, the action is turned on its head as you scroll vertically instead of horizontally.

You need to collect at least three of the five medallions hidden in each level in order to advance to the next stage and earn as many points as possible by smashing blocks along the way.

You and a friend can team up using an additional Wii Remote Plus (or Wii Remote with Wii MotionPlus accessory) with the second player controlling Zip's adorable friend, Pip. There are also eight unlockable mini-games and eight extra levels to discover - all playable by one or two players.

Use the Wii Remote Plus like a racket and watch Zip bounce around like a pinball to smash through oncoming barriers and enemies in this action packed sidescroller.

Wii Remote Plus
The Wii Remote Plus is an updated Wii Remote with built-in Wii MotionPlus hardware, giving players an incredible level of precision and gameplay accuracy without the need of additional add-ons.

Functioning in exactly the same way as the Wii Remote with Wii Motion Plus connected together, the Wii Remote Plus enables players to see every twist of the wrist or arm, brought to life and faithfully replicated on the TV screen with the use of one, compact controller.

Players of games such Wii Sports Resort and FlingSmash will be able to take full advantage of the enhanced accuracy and realistic motion control which the Wii Remote Plus offers, as every swing of a golf club or fling of Zip is reflected in real time on screen.