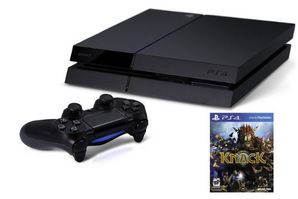 Knack for PS4... Mankind must turn to Knack, an unlikely hero, to protect them from a dangerous new threat. The unassuming Knack stands at a mere three feet tall, but thanks to the power of mysterious ancient relics, he can transform into a powerful brute or even a gigantic wrecking machine. Knack is mankind's only hope for turning the tide against the invading goblin army, but trying to harness the true power of the relics could threaten to put the whole world at risk.