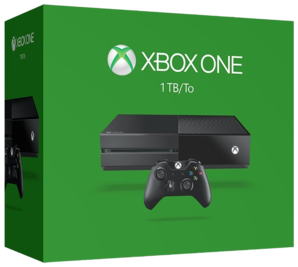 Please note, new consoles can only be purchased­/pre-ordered by our trade-in community.*
*any sales to new customers will be cancelled.

Xbox One was designed from the ground up to be the centerpiece of every living room with modern hardware, and it features the all-new Kinect, the new Xbox One Wireless Controller, a 1TB hard drive, an eight-core x86 processor, wireless networking connectivity, HDMI®, three super-speed USB 3.0 ports, and a high-speed Blu-ray™ disc player.

Xbox One delivers an entertainment experience like nothing before. Its innovative technology is rivaled only by its iconic design. Sharp corners and clean lines make for a sleek, modern console that complements any decor. Xbox One was designed from the ground up to be the centerpiece of every living room.

Xbox One is the perfect balance of power and performance. In addition to Xbox One’s revolutionary architecture, the combination of its CPU, GPU, and ESRAM is like having a supercomputer in your living room. But raw power is nothing without speed. So the Xbox One uses its power more effectively, creating lightning fast experiences unlike anything you’ve had before.

Xbox One was designed with a state-of-the-art gaming OS fused together with a powerful Windows OS. So you get the best of both worlds, without compromise. Forget about having to switch inputs to watch TV or play a game. Now you can run a host of apps right alongside your game without any loss of performance.

A new generation of Xbox Live.

Unleash the power of the cloud with a new generation of Xbox Live: the network that unites every member of the Xbox community. It also connects you to thousands of games, songs, TV shows, movies and sports. More importantly, it’s a scalable source of power that will grow stronger over time. Best of all, your games and profile are stored in the cloud, so every Xbox One console behaves like your very own. And because it’s all one service, your Xbox Live Gold membership will work on both Xbox 360 and Xbox One.

The best gaming controller just got better with over 40 technology innovations. New Impulse Triggers deliver precise fingertip feedback for more realistic experiences. Thumbsticks, D-pad and contours are streamlined for improved precision and comfort in your hands.3

Xbox SmartGlass turns your mobile phone or tablet into a second screen that intelligently interacts with your Xbox One. Navigate with your touch screen, pinch, and tap to surf the Web on your TV. Your wireless device becomes the ideal companion to your Xbox One as it serves up extended experiences of your favourite TV shows, movies, music, games, and sports.

Features include the following:

Gaming on Xbox One

Gaming on Xbox One immerses you in bigger, more cinematic worlds that look and feel more lifelike, featuring more believable characters and richer stories. Game worlds come alive through the unlimited processing power of Xbox One and the cloud. Feat